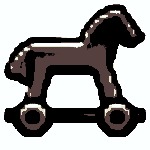 Researchers have spotted a new banking Trojan subbed ‘Tinba’ that appears to have hit on a simple tactic for evading security – be as small as possible.

Its main purpose is to burrow into browsers in order to steal logins, but it can also use ‘obfuscated’ (i.e disguised) web injection and man-in-the-browser to attempt to finesse two-factor web authentication systems.

A particularly interesting feature is the way it tries to evade resident security, injecting itself into the Windows svchost.exe and explorer.exe processes, as well as Internet Explorer and Firefox to give itself access to traffic passing through those.

The effects of malware can be anything from a brief annoyance to identity theft. Protect yourselves against malware. Remove malware as soon as you can. There are a number of programs out there that can help.

Protecting Your Credit Card From Fraud